Topo-Iberia is a proposal that involves more than 100 PhD researchers from 10 different groups. It corresponds to the willingness and interest of the Spanish scientific community to establish an integrated framework to develop multidisciplinary geoscientific studies in our country. The ‘micro-continent’ formed by the Iberian Peninsula and its margins constitutes a most suitable natural laboratory, well identified by the international scientific community, to develop innovative, frontier research on its topography and 4-D evolution. The objective of Topo-Iberia is to understand the interaction between deep, surficial and atmospheric processes, by integrating research on geology, geophysics, geodesy and geotechnology.

The knowledge on the relief changes and its causes is of great social impact concerning the climate change and the evaluation of natural resources and hazards. Three major domains of research have been identified: the southern and northern borders of the Iberian plate (the Betic-Rif system and the Pyrenean-Cantabrian system) and its central core (Meseta and Central-Iberian systems). It is intended to build up a comprehensive, multidisciplinary base of data and results to tackle the key existing questions by developing novel interpretation strategies. A major aim of this programme is to significantly increase the high-quality information available, by deploying a technological observatory platform, IberArray, of high resolution multisampling. With this programme, our community could join the leading edge of international research, marked by similar initiatives, such as TopoEurope/EuroArray in Europe or the ongoing US programme Earthscope. 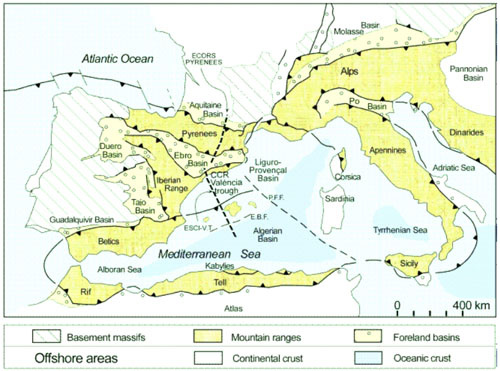