The advances in solid state lighting and laser technologies have brought about a tremendous expansion of the optoelectronic marke. The blue and near ultraviolet range of the spectrum is well covered by GaN, Ga-rich InGaN and AlGaN alloys. In the blue to green range InxGa1-xN alloys with x< 0.3 play a dominant role. The revision of the band-gap value of InN (0.64 eV) triggered a worldwide research thrust into narrow-band-gap III-nitride alloy systems which cover the spectral region from 1.9 μm (InN) up to 0.36 μm (GaN) and 0.2 μm (AlN). These materials are attracting much interest for their applications in optical communications and photovoltaics. The performance enhancement expected in nanostructures has also driven a surge in research on group-III nanocolumns (NC) and quantum well (QW) structures. Despite the success in achieving device operation, many fundamental properties of these systems are still poorly known.

In this project we will study the optical properties of these materials.  We will investigate InN films grown under different conditions on polar, semipolar and non-polar faces, with particular emphasis on the residual background electron density and the coupling of plasmons with LO phonons. Some unresolved issues regarding the surface electron accumulation in InN will be tackled by means of Raman scattering (RS) measurements in electrolyte gated samples. If p-type InN samples can be eventually obtained, we aim to study the coupling of bulk holes with LO phonons. The change in background electron density upon irradiation with He+ and H+ will be systematically studied in In(Ga)N  to obtain information about the Fermi stabilization energy in these compounds vs. the In content.

Regarding III-nitride nanostructures, we will focus on the optical properties of self assembled and ordered NCs of In(Ga)N and of multiple QW infrared detector structures. RS will be used to characterize the structural quality and composition of NCs grown under different conditions, and the presence of free charge and its coupling to LO modes will be investigated in doped NCs. RS studies of GaN/Al(Ga)N superlattices will be carried out aimed at studying the quality of the interfaces. RS by intersubband 2D plasmons will be employed to probe the subband levels in these structures.

Today, novel ZnO-based systems are attracting much interest because of the possibility of tuning their band gap over a wide energy.  In this project, we will study the emission and vibrational properties of  Al-, Ga- and In-doped ZnO, as well as Zn1-xCdxO alloys with 0<x<8.5%. Emission properties as well as possible compositional fluctuations and phase segregation in the alloy will be investigated by CL. By means of RS, we will study the character of the vibrational modes of the alloy as well as the phonon-frequency dependence on composition, which can later be used as a quick, convenient method for alloy characterization. ZnO NWs will be also studied by means of RS and CL. 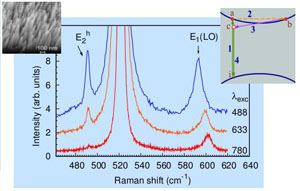