We have determined the age and internal structure of the Crosa de Sant Dalmai volcano (Girona), the largest Quaternary volcano of the Iberian Peninsula and one of the best preserved, combining mechanical drilling 60 m, geological mapping, detailed geophysical studies and palynological studies and C14 dating of pre-and post-eruptive sediments.

With the information obtained from mechanical drilling and geophysical surveys we have developed a synthetic 3D geological model of the sub-surface structure of the volcano. This is a poorly eroded diatreme-like structure, filled with lake sediments, with a sharp contrast in pre-eruptive subsoil materials (Paleozoic and Quaternary) on both sides of a NW-SE oriented fault that controlled magma ascent and subsequent eruption. The latest C14 dating indicates that the age of the latests pre-eruptive sediments is older than 43000 years without being able to specify which is that age, as it is below the detection limit of the 14C. So, this gives us just a possible lower age limit for the eruption. This fact together with the existence of an inaccurate radiometric dating (U / Th) from the basaltic lava flow found at the top of the eruptive sequence, which yielded an age of 90,000 years, makes constraint the age of this volcano between 90,000 and 43,000 years, which discards a Holocene age but confirms a much more recent age than the 2 Ma suggested by previous authors. 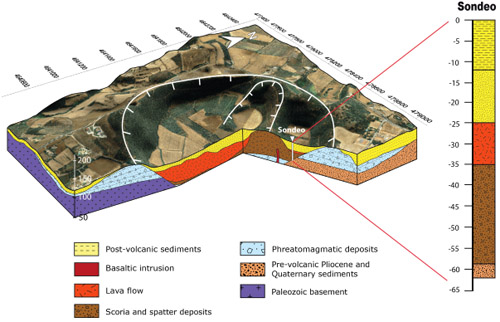