Pico Cabras dome is placed in the north flank of the Teide volcanic edifice (Tenerife, Canary Islands). It's approximately 600 meters long, 45 meters wide and with its 130 meters height, it is one of the most remarkable phonolitic domes of the Teide-Pico Viejo volcanic complex. A new study has identified the pre-eruptive conditions of this dome, whose eruption was characterized by the progressive transition between explosive to effusive phase. According to the new study, variations in the temperature and the amount of volatiles dissolved in the magma controlled the changes that occurred in the eruptive dynamics. The study, which has been published recently in the journal Lithos, has also identified the eruptive trigger of this eruption dated between 9000 and 5000 years ago.

Olaya Dorado, from Geosciences Barcelona-CSIC (GEO3BCN), is the first author of the study along with other researchers from GEO3BCN-CSIC, Joan Martí, and Adelina Geyer; and Joan Andújar, from the Institute des Sciences de la Terre d'Orleans (ISTO).

The researchers studied the petrological and chemical features of the eruptive products from the Pico Cabras dome. By doing so, the researchers could characterize and constrain the pre-eruptive conditions (temperature, pressure, and amount of volatiles) of the magmatic reservoir before the eruption to determine and better understand the influence of these parameters over the changes in the eruptive style.

"These changes in the eruptive dynamics are very common in dome eruptions in Tenerife, and also in other places. Therefore, it is necessary to understand them to be able to undertake an accurate hazard assessment on populated areas of the island in case of future eruptions", said Olaya Dorado.

Pico Cabras dome is an exogen-type dome. This type of dome is formed by "the accumulation of viscous lava fragments one on the top of another around the eruptive center rather than "swelling" from inside like a balloon". The researchers selected the Pico Cabras dome because its eruptive deposits were well preserved. "Explosive and effusive phases products are well preserved and they are a good example of how the eruption shifted gradually from explosive to effusive activity". 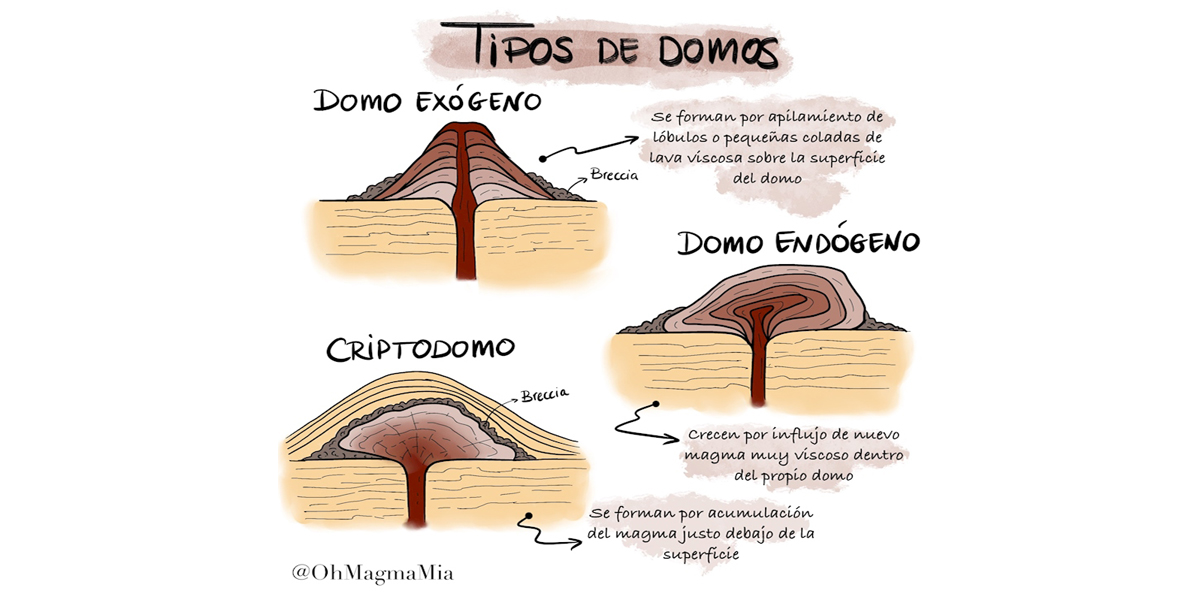 The researchers collected several samples from the dome structure. They also sampled the pumices from the explosive phase and the lavas flows resulting from the effusive phase. The samples were analyzed with a petrological microscope to determine their mineral phases. Afterward, the samples were analyzed by using a Scanning Electron Microscope (SEM). Micro X-ray fluorescence was also performed to measure the Chlorine and Bromine content in the samples. Both Chlorine and Bromine are volatiles from the halogen group.

"With all this information we were able to infer and constrain the origin and the evolution of the minerals and the processes that occurred inside the magmatic chamber", said Dorado.

According to the study, the magmatic reservoir that fed the Pico Cabras dome eruption was located around 1 km below sea level, being shallower than the "magma reservoir that feeds the central eruptions of Teide and Pico Viejo", as was stated by previous studies of the Tenerife domes.

The researchers propose a conceptual model to explain Pico Cabras dome-forming eruption. During the pre-eruptive phase, the magmatic reservoir was zoned, formed by the accumulation of magma layers with slightly different compositions and temperatures. The less dense and evolved magma and the majority of volatiles (water and other gases) would have accumulated in the uppermost part of the reservoir.

The intrusion of a more mafic, more evolved, and hotter magma in the reservoir triggered the eruption. "This intrusion would have destabilized the magma chamber due to its higher temperature", provoking the explosive emission of the uppermost magma layers and "forming a subplinian eruption column, which rapidly waned in intensity given rise to a low fire fountaining eruptive phase of hotter and less volatile-rich magma". Scoria fragments accumulated then on the vent forming the dome-like structure, The last part of the eruption corresponded to the emission of the main part of the chamber in the form of lava flows.

The researchers found sodalite crystals in the analyzed pumices samples. Sodalite is a mineral of the feldspar group rich in chlorine. "The presence of sodalite is an indicator that the magmatic system is capable of generating highly evolved magmas", said Dorado. "Its presence also indicates us the presence of a significant amount of halogen gases inside the magmatic system, which play a large role in ozone layer depletion once they reach the stratosphere".

This research is another step forward in the efforts made in recent years to improve knowledge of the Teide-Pico Viejo past eruptions to be applied in future hazard assessments in the island. "The study allows us to better understand the Tenerife plumbing system, specially the dome-like phonolitic eruptions, which are more explosive and more dangerous", said Dorado. According to Dorado, all this information is "essential to conduct hazard assessment studies on Tenerife Island and to correctly interpret the monitoring signals of other active volcanoes".