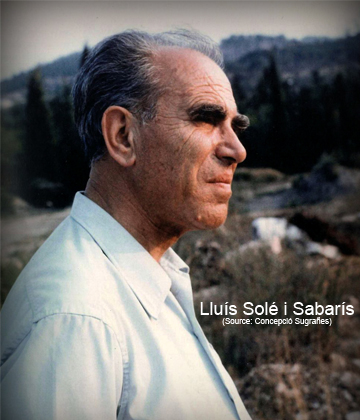 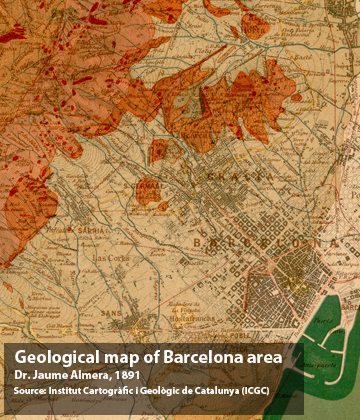 A new institute called Instituto Jaume Almera de Investigaciones Geológicas (IJAIG) was created in 1965 in the setting of a major reorganization of the Spanish National Research Council (CSIC), under the direction of Dr. Lluís Solé Sabarís. This Institute grouped the sections of the Institute Lucas Mallada located at the University of Barcelona and its research was focused on the Geological Sciences with major emphasis in the regions near Barcelona (Pyrenees, Coastal Catalonian Ranges and Ebro Basin).

Between 1978 and 1979, within a substantial change in the structure of CSIC, the IJAIG became a center of the CSIC, independent of the University of Barcelona, and moved its headquarters from the University of Barcelona historical building to the building of CSIC in the Egipcíaques Street, being Dr. A. López Soler new director of the Institute. The structure of the Institute comprised 4 Structural Research Units (UEI) until 1981: Biostratigraphy, Regional and Marine Geology, Mineralogy and X-ray Diffraction and Crystal Structures.

The construction of the present building of the Institute in the Pedralbes Campus of University of Barcelona finished in 1981, an d it was officially inaugurated in 1982. The Library of Geology was established in 1983 with the bibliographic and cartographic collections of the Institute and the Faculty of Geology of the University of Barcelona. This collaboration between both institutions is also reflected in joint research projects and master and doctoral programs.

In the early 80's, the name of the center changed to Instituto de Investigaciones Geologicas Jaume Almera (IIGJA) and it was composed of 2 Structural Research Units (UEI): Marine Geology and Resources and Materials. The Marine Geology Unit was assigned in 1986 to the Instituto de Ciencias del Mar (ICM-CSIC). Another  group of researchers from the IIGJA became part of the Instituto de Ciencias de Materiales of Barcelona (ICMAB-CSIC) which was created that year.

With a new reorganization from 1987 (which remained until 1992), the Institute was made up of 2 Structural Research Units (UEI): Environmental Geology and Geophysics. In late 1988,  the institute was renamed as Instituto de Ciencias de la Tierra Jaume Almera (ICTJA). Dr. E. Banda was the director between 1988 and 1991.

Since 1993, the ICTJA had 3 Structural Research Units (UEI): Geophysics, Environmental Geology and Natural Hazards. These UEIs (Departments from 1994) remained until 2005 with slight name changes. Dr. A López Soler became director between 1991 and 2000, Dr. M. Torné between 2000 and 2001, and Dr. C. Ayora between 2001 and 2005. Moreover, being director Dr. Manel Fernández (2005-2012), the Institute was reorganized in 2006 into 4 departments: Sedimentary Geology, Environmental Geosciences and Crystallography, Structure and Dynamics of the Earth, and Geophysics and Geohazards.

In 2020 the Institute has merged the existing research groups into just a single one, removing also the existing research departments. This unique research group will devote its efforts to the achieve three main research challenges focused on the global geodynamics and its relation to the mineral and energetic resources and extreme hazards. Without abandoning basic research, which is the main cornerstone of our institute, this new endeavor wants to provide solutions to some of the main issues that our society has to become safer and more sustainable .